The concept of atoms, molecules and ions:

Atom is the smallest particle of an element which can take part in a chemical reaction. The word atom is derived from the Greek word Atomos, meaning indivisible; which could not be further destroyed or reduced. Atoms of different elements have various shapes. 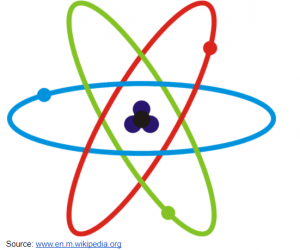 Molecule is the smallest particle of a substance that is capable of independent existence, and still retains the chemical properties of that substance. A molecule is formed when two or more atoms are chemically joined together e.g. H2, O2, N2 etc. Thus the number of atoms in a molecule of an element is called its atomicity. 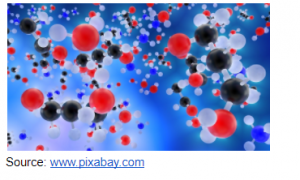 The idea that elements are made up of atoms is called the atomic theory. In 1808, John Dalton of England put forward his famous atomic theory which states as follows:

Constituents of the Atom

We have three main particles of an atom which are also regarded as fundamental particles and the particles are proton, electron and neutron.

According to Rutherford’s nuclear theory (1906), the neutron and proton make up the nucleus of the atom. The nucleus is positively charged and surrounded by the electrons in an orbital manner. Atoms are electrically neutral because they contain the same number of electrons and protons. 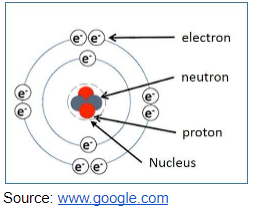 Diagram on arrangements of electrons around the nucleus 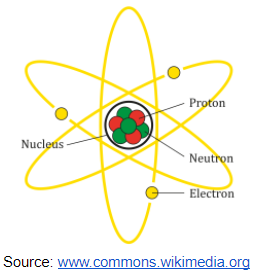 The atomic number: it has to do with the number of protons present in the atomic nucleus of the element. It is donated by Z and increased by one when the elements were arranged in order of ascending relative atomic mass.

Mass number: it is the sum of the protons and the neutrons in the atomic nucleus of the element.

Isotopes: isotopes are atoms with the same atomic number but different mass number. 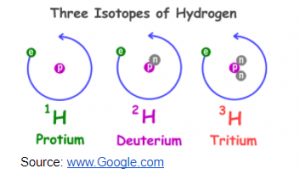 The relative atomic mass carries no units; it is a ratio given by

Note that the relative atomic mass of each element has been verified accurately with the aid of the mass spectrometer introduced by Aston.

It is the sum of the relative atomic masses of all atoms in one molecule of the substance.

Mole is the amount of substance that contains as many elementary entities as there are carbon atoms in 12grammes of carbon.      =           Mass in grams /  Relative molecular mass

Molar mass of any substance is the mass of one mole of the substance expressed in grams. Its unit is in grams per mole (gmol-1).

Solution: remember that atoms that are electrically neutral contains the same number of protons and electrons

Solution: in other to get the number of electrons in the ion subtract the atomic number (9) from the mass number (19) which is equal to 10

Answer: it can be defined as an atom with the same atomic number but different mass number.

Answer: The mass number of an element is the sum of the protons and the neutrons in the atomic nucleus.