(A) concept of work

Work is said to be done whenever a force moves a body through a certain distance in the direction of force, and is equal to the product of the force and the distance moved.

The SI unit of work is the joule (J).

One joule is the work done when a force of 1 Newton moves a distance of 1 metre.

Larger units are the kilojoule (kJ) and the megajoule (MJ).

(B) concept of energy

(C)work done in a force field

In the gravitational field, there is always a force pulling a body towards the Earth’s centre. The weight of a body is the force of attraction on a body as a result of the Earth’s gravity acting on its. The magnitude of the work done is given by:

g = acceleration due to gravity

There are two kinds of mechanical energy:

The work done in bringing the body to rest from initial speed v to final speed zero should be equal to the kinetic energy of the body when its speed is v.

Where m is the mass in kg, v is the speed in ms-1.i.e. work done = change in kinetic energy of the body.

Note: if a spiral spring is stretched a distance e, it is made to acquire an energy referred to as elastic potential energy. The magnitude of this energy can be shown to be ½ ke2 where k is the elastic constant of the spring. A stretched catapult gives the stone potential energy, so that when released, the stone flies through the air with considerable speed.

A typical example of alternating potential and kinetic energy is that of simple pendulum.

=.   Energy or work per second

Where v is Velocity.

The SI unit of power is called the watt(W) which is the rate of transfer of energy of one joule per second. 1W = 1Js-1

Large units are the kilowatt (kW) and megawatt (MW)

Note: a unit of energy that is sometimes used for electrical energy is the kilowatt/hour, kWh. This is the energy used by an appliance with a power of one kilowatt in one hour.

General principles of a machine

Note: efficiency of a machine is formulated as follows;£= work output  × 100%

The lever is a simple form of machine. The term lever is applied to a rigid body pivoted about a point called a fulcrum (F). An effort (E) is applied at one point on the lever and this overcomes a load (L) at some other point.

Note: if y and x represent the distances of load L and effort E from the fulcrum F in each of the above levers, then taking moments about F gives y×L = x × E

This is the class of levers in which the load L is between the fulcrum F and effort E. Examples include nut crackers and wheel barrows.

In levers of this class, the effort E is between L and F. Examples include the forearm of a human body and a pair of laboratory tongs.

A simple pulley is a fixed wheel with a rope passing round a groove in its rim. A load, L, is attached at one end of the rope while the effort, E, is applied at the other end. If we neglect friction at the wheels and the weight of the rope, then tension, T, in the rope will be the same throughout.

Therefore, when there is no friction, L=T=E.

The mechanical advantage (M.A)=1=V.R. if there is no friction present.

Note: pulleys can be combined to form machines used for lifting loads. They are used by builders for hauling heavy loads to high floors or in loading and unloading ships. The aim of combining pulleys is to achieve a larger Velocity ratio and thus also higher mechanical advantage.

Heavy loads such as drums of oil and engine blocks can be raised with the aid of a sloping plank with little applied effort. The arrangement is called an inclined plane and it is said to be a machine.

Then the Velocity ratio for inclined plane

In general, V.R and hence the M.A increases when O decreases.

A small effort is required to lift a large load. If there is no friction (the liquid inside the press is usually an oil).

Where R and r are the radii of large and small pistons respectively.

Note: also if x and y are the distances moved by E and L respectively, we have A1x = A2y

The screw can be thought of as an inclined plane wrapped round a cylinder to form a thread. The simplest example of a screw is a nut and bolt. As the nut is turned, it moves along the thread of the bolt as though travelling up an inclined plane.

The screw as an inclined plane

Thread of a screw

The wheel and axle

Let a and b be the radii of the wheel and axle respectively. Then Velocity ratio

Thus velocity ratio of the wheel and axle is given by:  V.R = a/b

Gears work on the principle of wheel and axles. Thus the Velocity ratio of gear system is:

Number of teeth ratio on the driven gear

Number of teeth on the driving gear

Note: other machines that work on wheel and axle principle are: the brace used by Carpenters to bore holes on wood, screw driver, box spanner, etc.

Friction is defined as a force which acts at the surface of separation of two bodies in contact and tends to oppose the motion of one over the other.

If a body A is placed on another B, the normal reaction of B on A, R is equal and opposite the weight mg thus  R= mg

Experiment shows that if A is increased by adding another weight A2 on it, the limiting frictional force F or P increases, i.e. as R increases F increases so that F is directly proportional to R i.e. F = R.  F= uR

II. It depends on the nature of the surface in contact

III. It depends on normal reaction f= uR

V. It is independent of relative velocity between the surfaces.

Friction is reduced in machines for two reasons:

1.a wooden blocks of mass 1.6kg rests on a rough horizontal surface. If the limiting frictional force between the block and the surface is 8N. Calculate the coefficient of friction. [g= 10ms-2] (WASSCE 2000)

4.a stone of mass 2.0kg is thrown vertically upwards with a Velocity of 2.0ms-1, calculate the initial kinetic energy of the stone. (WASSCE 2006)

The figure above represents a block and tackle pulley system on which an effort of W newtons supports a load of 120.0N. If the efficiency of the machine is 40°, then the value of W is. (Jamb 1986)

Solution: Work = mgh the conclusion is no motion

7.a hydraulic press has a large circular piston of radius 0.8m and a circular plunger of radius 0.2m. A force of 500N is exerted by the plunger. Find the force exerted on the piston. (Jamb 1995) 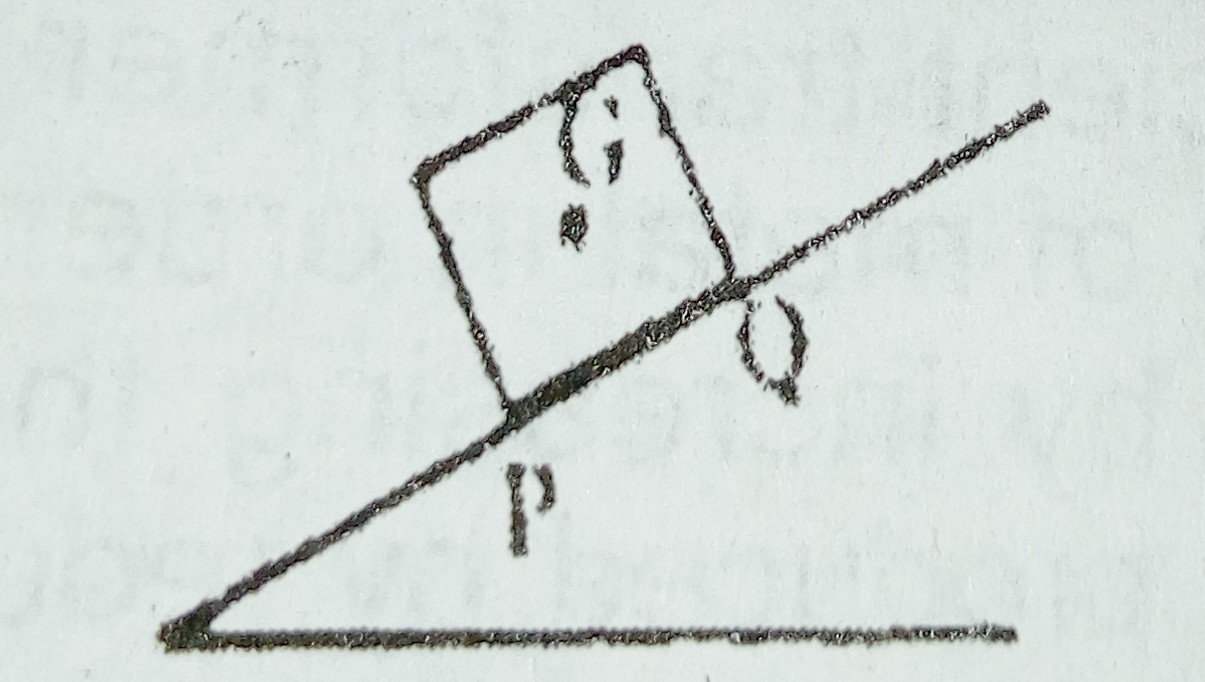 The diagram above shows a solid figure with base PQ and centre of gravity G on an inclined plane. Which of the following statements is correct?(jamb 1999)

A. The solid will fall over if the vertical line through G lies outsides the base

B. The solid will fall over if the vertical line through G lies inside the base

C. The solid will not fall over if the vertical line through G lies outside the base.

D. The solid can never fall over.