(a)Concept of speed as change of distance with time

Speed v, is the rate of change of distance with time.

Where s and t refer to change in distance and change in time respectively. The SI unit of speed is ms-1.

(b)concept of velocity as change of displacement with time

Velocity is speed measured in a given direction. Or velocity is the rate of change of displacement with time. It is therefore a vector quantity.

Note: in ordinary conversation, the word velocity is often used in place of speed. In science, it is important to distinguish between these two terms as we have seen above. Speed is a scalar but velocity is a vector.

(b)Also, by definition, acceleration a = rate of change of velocity and since a is constant we have:  a = v + u/t

(c)Uniform and uniform speed and velocity

Speed: the slope of this graph at any point is constant = dv/dt = a, the acceleration

Velocity: when a body travels in uniform velocity then velocity v = ds/dt

½(sum of parallel sides)  x (perpendicular distance between them)

Acceleration, a, is the rate of change of velocity that increases with time.

The SI unit of acceleration is ms-2.

(D) Motion under gravity as a speed

A typical example of uniformly accelerated motion is the motion of a body under the influence of gravity. Galileo is supposed to have performed this historic experiment by dropping a heavy object and light object from the top of a tower called the leaning tower of pisa. Both objects landed at the same time.

Why do the two objects land at the same time? The reason is that the inertia of an object, or its resistance to acceleration, depends on its mass, which also determine its weight. Thus, a large mass has a large weight but also a large inertia, so that it falls with the same acceleration as a small mass. 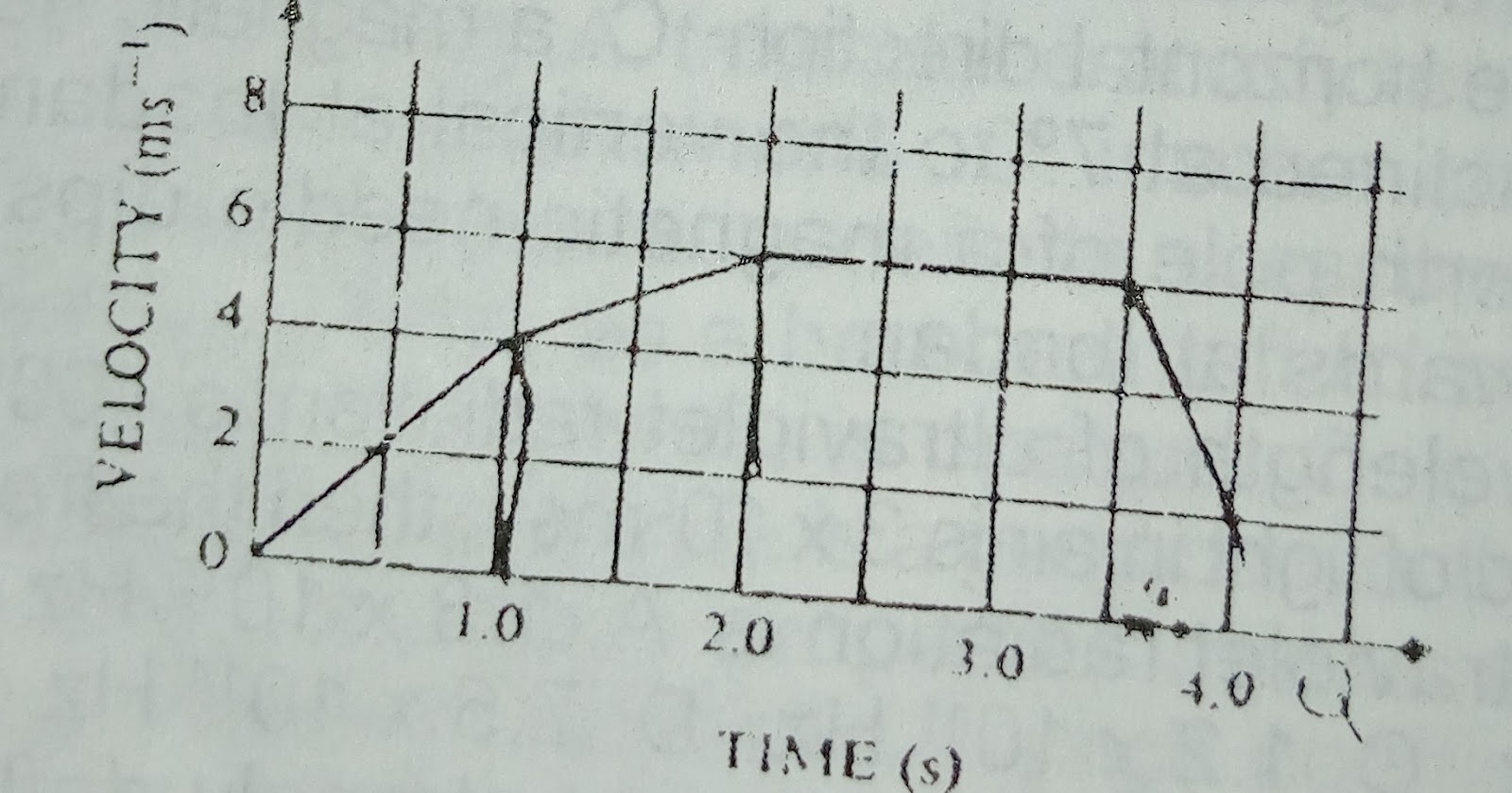 The velocity- time graph above describes the motion of a particle between two points p and q. What is the distance between p and q? (Jamb 1987)

Solution: distance = area under the graph

3. An object moves with uniform speed round a circle. Its acceleration has. (Jamb 1991)

A. Constant magnitude and constant direction

B. Constant magnitude and varying direction

Solution: the size of an object can’t change at all, but the direction of the object is the only thing subtle to change 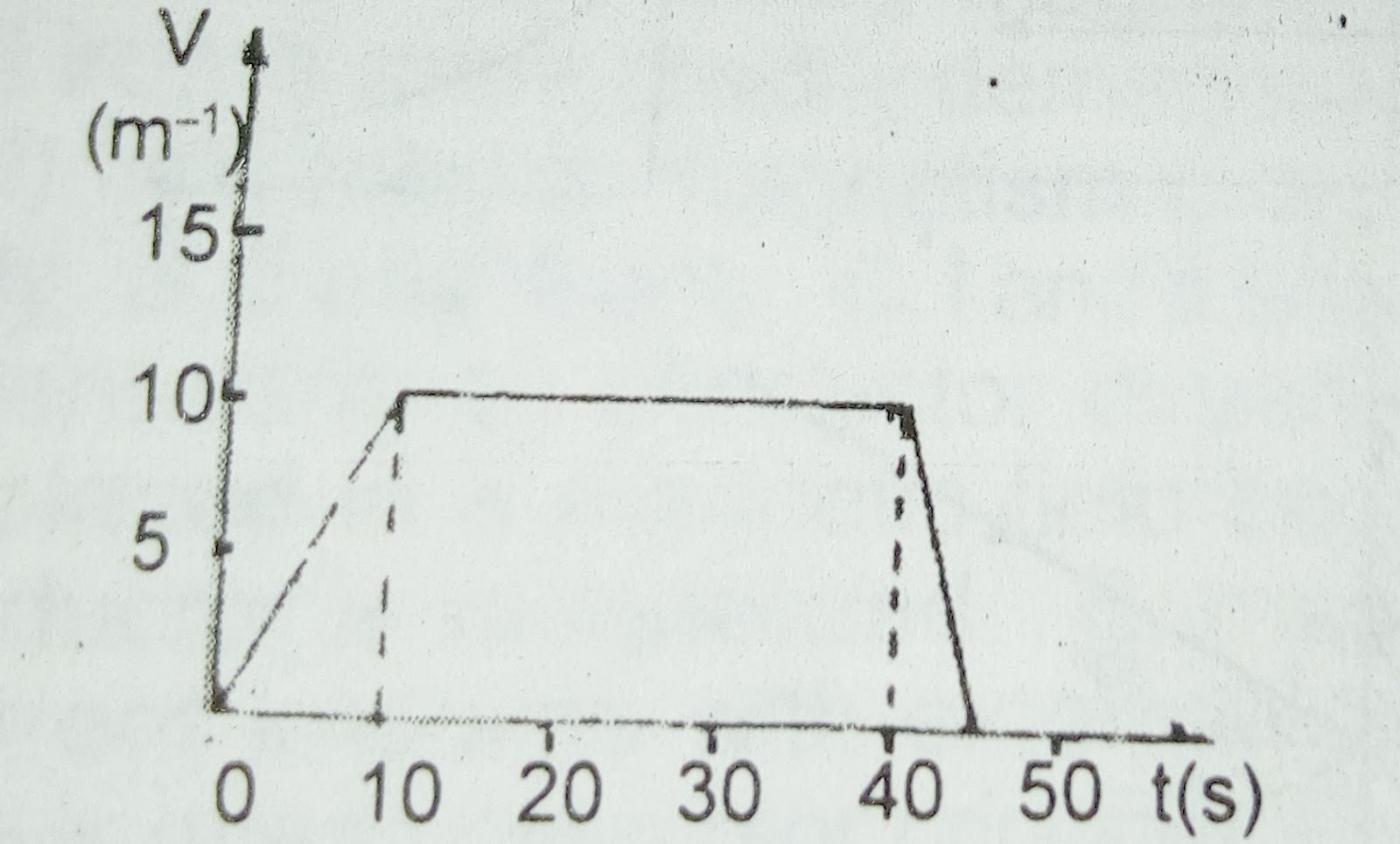 The diagram above shows a velocity-time graph representing the motion of a car. Find the total distance covered during the acceleration and retardation periods of the motion. (Jamb 1993)

5. An elevator of mass 4800kg is supported by a cable which can safely withstand a maximum tension of 60 000N. The maximum upward acceleration the elevator can have is (jamb 1987)

6. A car travelling with a uniform velocity of 30ms-1 along a horizontal road overcomes a constant frictional force of 600N. Calculate the power of the engine of the car. (Wassce 2008)

7. A motorcyclist traveling at 30ms-1 starts to apply his brakes when he is 50m from the traffic light that has just turned red. If he just reached the traffic light, his deceleration is. (Jamb 2005)

8. A car travelling at a uniform speed of 120kmh-1 passes two stations in 4 minutes.