Conduction in solids: every solid conductor of electricity can be classified as either a metal, a semiconductor, or a non-conductor termed insulator.

Metals: metals are characterized by low values of electrical resistivity of about 10-8 to 10-6 ohm meter, e.g. silver, gold, copper and aluminum. A metal exhibits charge neutrality because the negative charges on the free electrons are balanced by the positive charges associated with the nuclei. As temperature increases the resistance of metallic conductors increase due to higher collision between atoms.

Semiconductors belong to group IV in the periodic table with four electrons in their outermost shells. When all the valence electrons are constrained in covalent bonds, no charge carriers are free to move and hence there is no conduction.

Insulators have very high resistivity of between 107 to 1018ohm-meter. Examples are quartz, polyethylene and diamond. Here, all the electrons are bound to the crystals and none is free to participate in conduction.

Impurities in semiconductors: pure semiconductor materials do not conduct current very well because of the limited number of free electrons in the conduction band. In addition they require that the holes and electrons be present in exactly equal numbers. These impurities are donor impurities and acceptor impurities.

A p-n junction is made by growing in a single semiconductor crystal, part of which is n-type and the other p-type. The boundary inside the crystal between p-and n-regions is termed p-n junction; p-n junction occurs whenever the impurity concentration changes from a predominance of donors to a predominance of acceptors over a sufficiently small distance.

In the early days of solid state electronics, computing and electronic circuits were constructed from discrete and individual components such as diodes, transistors, resistors and capacitors. In the 1950s, it was made known that the possibility of forming all the components for such circuits in a single chip (wafer) of semiconductor material and this became known as integrated circuit (IC).

Note: the equation for solving operational amplifiers which includes non-inverting and inverting respectively.

1.Which of the following diagrams represents correctly an n-p-n transistor? (Jamb 2018) 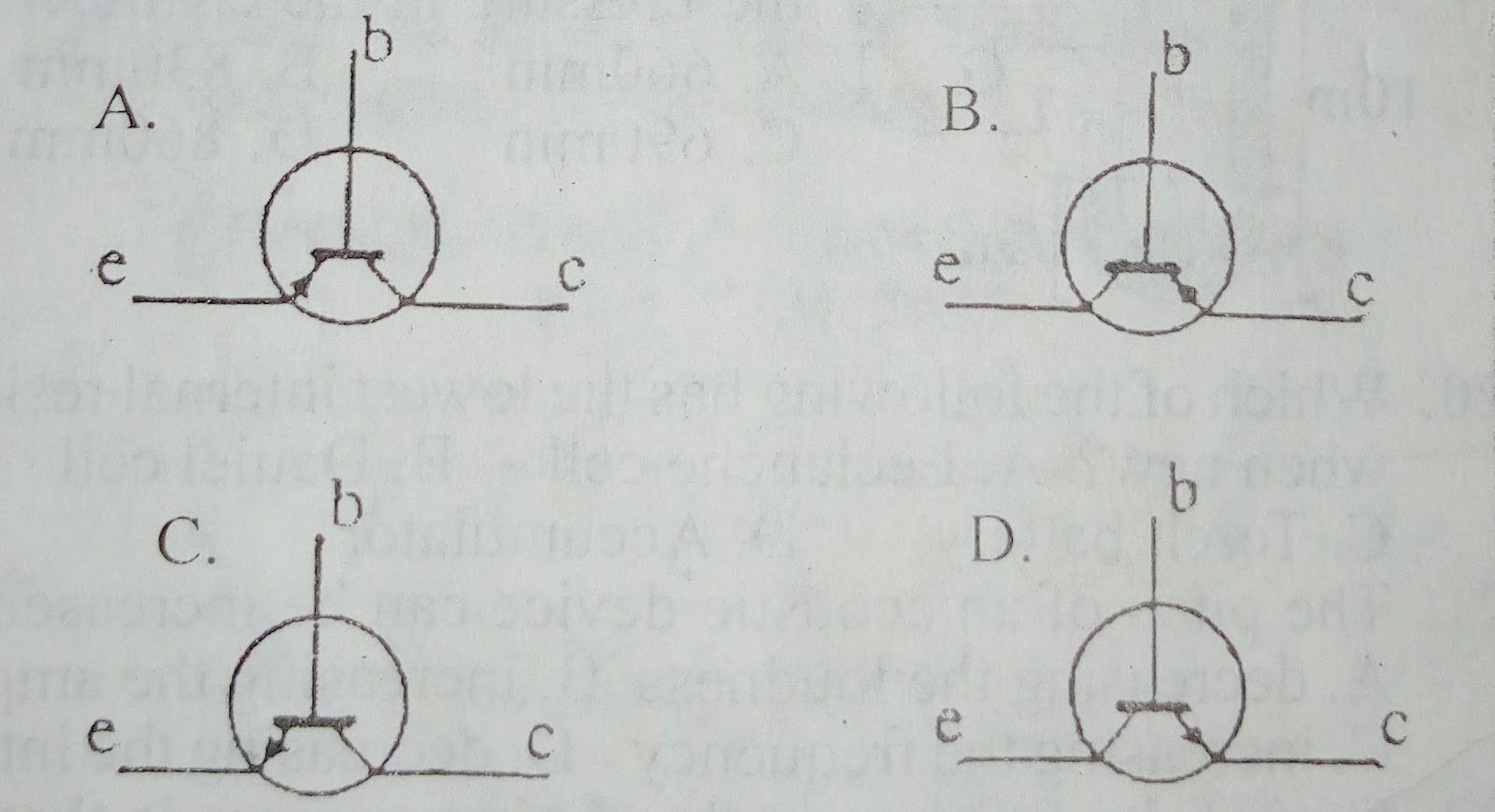 A. Switch and an amplifier

B. Rectifier and an amplifier

C. Charge storer and a switch

D. Charge storer and an amplifier

B. Increases then decreases.

Solution: this shows that impurities slow or reduce current in a semiconductor

A. Conduct current when forward-biased

B. Conduct current when reverse-biased

D. Conduct current in both directions

7. When light falls on a metallic surface, the number of electrons that may be emitted would depend solely on the ? (Wassce 2002)

A. Area of the metallic surface

B. Frequency of the light

C. Intensity of the light

D. Time of exposure of the metallic to light

A. Evenly distributed over a surface of any shape

B. Concentrated on the inner surface of the conductor

C. Concentrated at the outer flat surface of the conductor